Gold mining consists of the processes and techniques employed in the removal of gold from the ground. Earlier gold was mined using different methods like Panning, cradling, dry blowing, shaft mining, puddling, and dredging. Nowadays open-cut mining and underground methods are used for mercury-free gold mining.

Panning is one of the oldest techniques of separating gold from rock. The gold panning technique was introduced by Isaac Humphrey at Coloma. Also, Mexicans developed panning technique in their country, using a flat dish called a batea. Gold panning was slow even for the most skillful miner.

In a single day, one miner was able to wash only 50 pans in a 12-hour workday and obtain only a small amount of gold dust. This method was the most common method of mining on the goldfields. Rocky material was loosened with pick and shovel. After it had been broken down, this rocky material was taken by wheelbarrow to a creek where it was carefully washed and swished around a shallow metal pan. 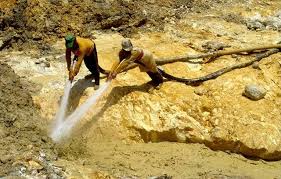 As the water separated the particles of dirt, rock, and pebbles, small deposits of gold sank to the bottom of the pan. This was successful for yielding small nuggets. A persistent prospector could find a considerable amount of gold over time.

This method was introduced by Isaac Humphrey. Cradling involves a wooden box with a handle on one side and a ridged bottom covered with Hessian cloth. Large pieces of rock were sorted through and discarded if they did not yield any gold.

Finer rocks and pebbles were then washed with creek water across the ridges in the bottom of the cradle. This method was more successful then panning in that it meant that greater amounts of gravel and dirt could be examined.

This method was not very effective. This method was adopted in some parts of Australia like Kalgoorlie in Western Australia. In this method, two pans were used. Fine, dust-like material was poured from a pan held high, into the second pan which was positioned on the ground.